DailyFaceoff is a fantasy sports website with no direct affiliation to the NHL, its teams, or the NHLPA
Home > Fantasy > 2016 > 04/15 > Playoff Preview: Lightning vs. Red Wings | Game 2

This is my GameDay post for Game 2 on wingsnation.com, so it’s geared towards the Red Wings, but remains without bias and still previews Game 2 from both team’s perspectives.

Game 1 didn’t exactly go as the Red Wings would have liked, however there were positives and things that they can build on as this series continues. Through two periods the Red Wings looked like the better team, but they had a difficult time beating Lightning netminder Ben Bishop. They have the talent to score, but it has been their bugaboo all season-long.

As you can see below, the Red Wings were fairly dominant in the second frame, but were unable to take the game by the reins. In the third, the Lightning came out with a fire under their asses and took it to Detroit and ultimately took game one of the series. 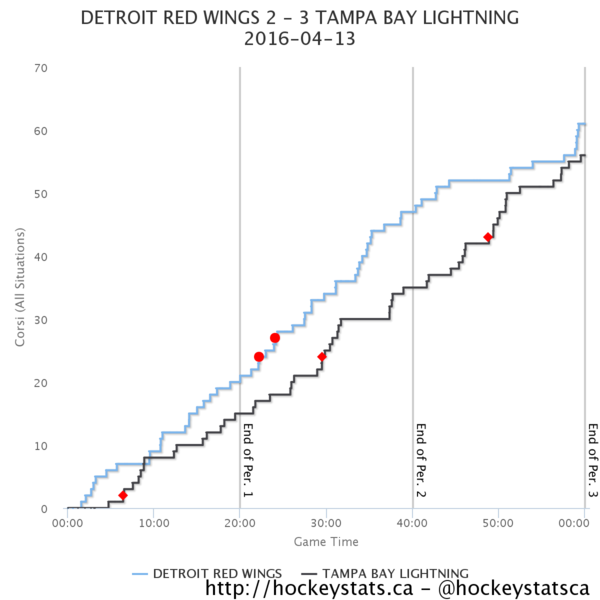 It was easy to tell that these two teams met in the postseason a year ago. The nastiness picked up right where it left off in 2015 and it will definitely continue into game two. Detroit will be looking to push-back tonight and send the series back to Detroit all tied up. Last year, the Red Wings won game one, but were blown out, 5-1, in Game 2, maybe Detroit can do that to the Lightning tonight. Let’s break this one down! 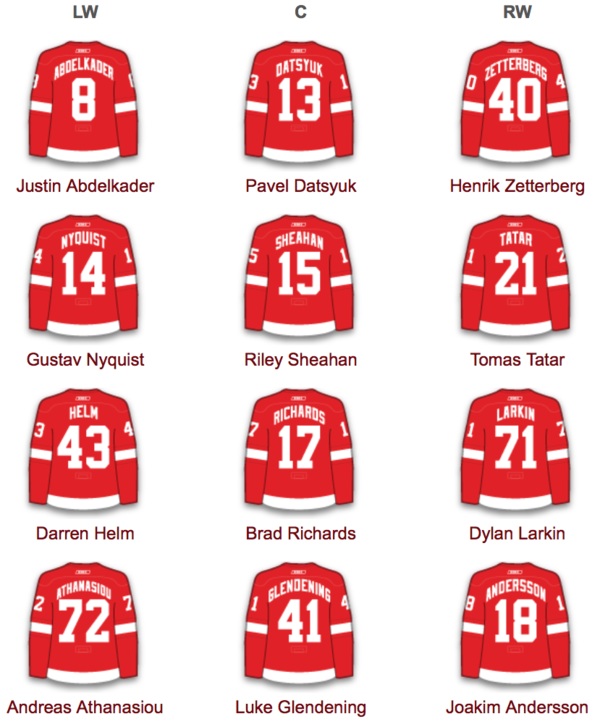 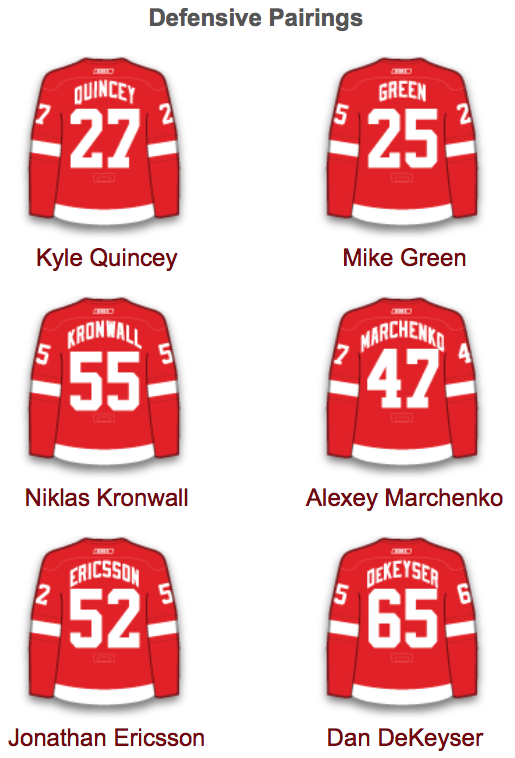 The Red Wings will not change their 18 skaters, but will alter their defensive pairings a bit. After watching the Red Wings get bullied a bit, I would like to see anyone with some toughness fill in for Joakim Andersson. He is simply not good enough and certainly not physical enough for playoff hockey–if that’s the guy you’re going to call-up.

Pavel Datsyuk and Henrik Zetterberg aren’t the same players they once were and that is becoming more and more obvious, but they have to play well if the Red Wings are going to have a chance in this series. Their second line of Gustav Nyqust–Riley Sheahan–Tomas Tatar had a strong game on Wednesday and they could be the X-factors in this series, specifically Tatar as Sam Blazer points out. I thought Brendan Smith would be re-inserted into the lineup for his foot-speed, but he will remain a healthy scratch for the ninth consecutive game. 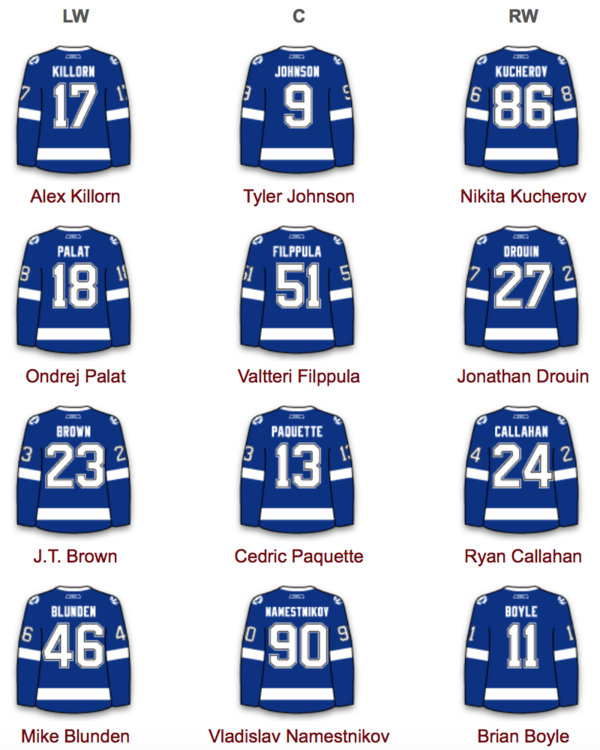 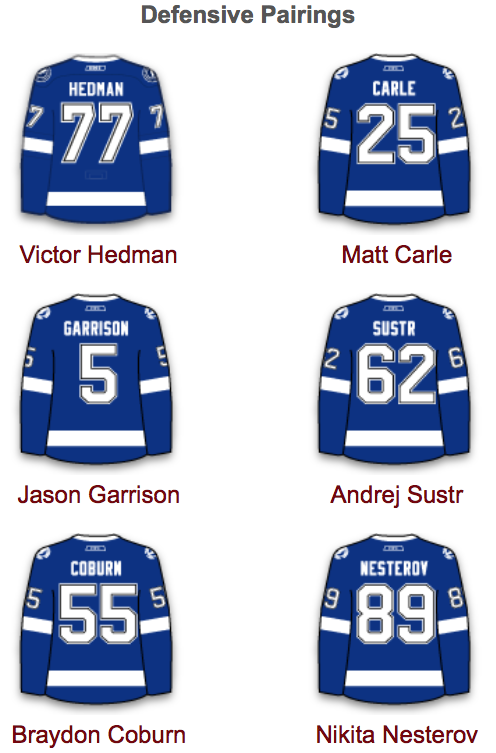 After a game one victory, the Lightning lineup will remain the same tonight. Even without Steven Stamkos out of the lineup, the Red Wings still can’t contain Tyler Johnson. Despite having a so-so season, Johnson picked up where he left off in round one a year ago. He had six goals and one assist in seven games last year and has already picked up two helpers to start this series. His line with Alex Killorn and Nikita Kucherov killed Detroit in game one and will continue to do so unless the Red Wings figure out how to slow them down.

Like I mentioned on Wednesday, it has been a drama filled season for Jonathan Drouin and he looked pissed off in game one. He was constantly involved physically and seemed to get under the Red Wings skin. He was held off of the scoresheet, but his performance was definitely eye opening for Red Wings’ fans.

Besides Bishop, the Lightning’s best player in game one was Victor Hedman. He is a fantastic all-round D-man and he frequently jumped into the rush. He will be a force all series long, you won’t be able to stop him, Detroit just has make sure he doesn’t kill them.

Jimmy Howard gets the nod in Game 2. It is hard to fault Howard for the game one loss. He stopped 31 of 34 shots and didn’t have much of a chance on two of the three goals. While Petr Mrazek is probably the better goalie and gives the Red Wings the best opportunity to win, Howard has been steadier and simply more reliable in the last month. Look for Howie to go tonight, but should Detroit lose again, we could see a goalie switch heading back to Detroit.

It will absolutely be Ben Bishop again for the Lightning. He made 34 saves on 36 shots, including a number of huge stops late in the third period. Bishop stood on his head last year and so far it has been much of the same. Dating back to game one last year, Bishop has gone 7-5 with a 1.85 GAA, .928 SV% and one shutout against the Red Wings.

For each game of the postseason I’m going to conduct an NHL 16 simulation of that game. Use up-to-date line combinations, power-plays, penalty kills and goalies. Who knows how accurate it will be (probably not at all), but it will be interesting to monitor.

The first game of the NHL 16 simulation got the score right, but not the winning team.

In game two, Detroit allowed the Lightning to get on the board first, just like on Wednesday and were dominated for much of the first period. Not much changed in the second period as the Lightning added two more goals to take a 3-0 lead into the third period.

Down 3-0, I thought all hope was lost for the video game Red Wings, but Pavel Datsyuk scored early into the frame to give them hope. Shortly after Brad Richards scored and then Riley Sheahan added a third to tie the game up. What resilience!

However, Jonathan Ericsson took an interference penalty with under three minutes left to put the Lightning on the power-play. Sure enough, the Lightning scored with the man advantage (video game Jimmy should of had it) and the Lightning held onto the 4-3 lead for the final 1:20.

Detroit outshot the Lightning 34-26, but much like real-life game one, Ben Bishop was equal to the task

Puck drop is at 7:00 p.m ET at Amalie Arena in Tampa Bay. You can watch it on Fox Sports Detroit, CBC or CNBC and if you aren’t near a television, you can catch it on the Radio with WXYT-FM 97.1 The Ticket.

Also, make sure to follow us on Twitter; we’ll have live tweets, GIFS, and all the fun stuff that a topical social media platform has.

A weekly view of the NHL schedule organized by team to help you plan for your weekly matchups.

Not a member? Join the Nation

Please enter your email address to reset your password.